Graeme Ruthven (April 16, 1978 – June 8, 1998) was a true and exemplary house league player. He never won a scoring championship and was not regularly chosen to be a Select hockey player. Yet he was a committed and dedicated hockey player who enjoyed the camaraderie and challenges of team competition while attending practices or games for his Blessed Trinity house league team.

Graeme graduated from St. Michael’s College School in June 1997, and had just completed a year of computer science studies at St. Jerome’s College at the University of Waterloo in May 1998. His life was cut short at the age of 20, when the small plane in which he was training for his private pilot’s license crashed at the Buttonville Airport.

Graeme was always available as a volunteer to the North York Knights Hockey Association. He was a timekeeper and a referee, and was always willing to help wherever he was needed to serve the Association that had introduced him to hockey.

Each year, therefore, a house league player in his or her last year of high school is awarded the Graeme Ruthven award based on the commitment shown to their team and the association during his or her hockey career with the North York Knights. 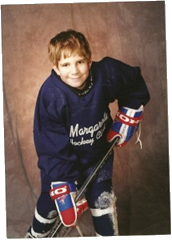 This award was created in 2007 in honour of David Tysall who had passed away from cancer earlier that same year. David was 20 years old and had spent his entire hockey career in the Knights House League organization playing for St. Margaret.

David had regularly volunteered his time on Saturday mornings to help with the Learn-to-Play classes, not simply to acquire the required high school community service hours but mainly because he truly enjoyed working with and helping the “little” kids. He never complained about being up and out early on Saturday mornings to attend the early sessions at York Mills Arena; he was completely dedicated to sharing his love of the game with these young players. He clearly had the true spirit and dedication of a committed volunteer.

The David Tysall Volunteer Award is therefore given annually to the volunteer within the Association who has generously, quietly, tirelessly and without prompting donated countless hours toward the ongoing success of the North York Knights Hockey Association.

The Blessed Trinity Hockey Association is one of the original parishes that helped establish the North York Knights Hockey Association. A $500 Bursary is awarded each year by a 5-person Awards Committee from the Knights to provide financial assistance to help fund a post-secondary education for a participant in the House League program.

The recipient must be a player, referee or timekeeper with the Knights House League, must be in their final year of high school, and must have applied to a post-secondary education or technical apprenticeship starting in the Fall. The selection of the winner is based on the candidate’s answers (in a 500 word essay) to the following three questions:

1. What has North York Knights hockey meant to you?
2. What has been your community involvement in high school?
3. What are your plans for the future?

The Bursary recipient will have expressed insight into the value of belonging to the North York Knights Hockey Association, shown ongoing dedication to volunteering and demonstrated a strong commitment to their studies.